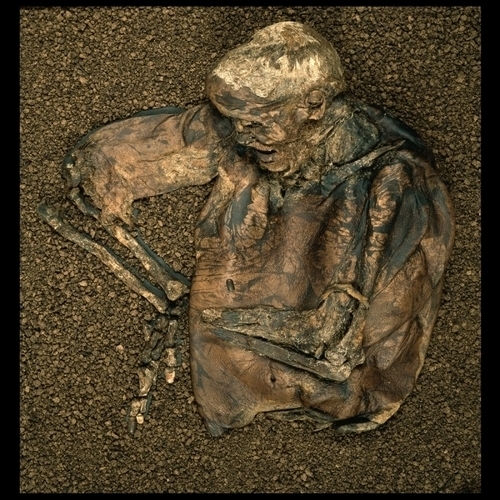 This work is basically evidence of possible human sacrifices made by the British Culture. The artist captured the perception of human sacrifice from the victims point of view. The artist used raw materials such as rocks or gravel to create a burial like or even abandoned atmosphere. The separation of the bones emphasizes the decaying of the man's body. The right arm as well as the bottom waste line of the man has a rigid outline implementing possible decapitation of body parts. The mass of the shiny gold textured head is in the metal family is raised from the flat background creating an illusion of the head raising. Here is also a dent in the top of his head in which he may have suffered head trauma. The details sculpted into the mouth eyes nose and cheeks adds expressions of disbelief and agony emotion to his face . The use black spray paint simultaneously placed on top of the shiny gold texture in different areas of the upper body creates an awesome illusion his clothes slightly covered in dirt or simply wearing away.

Sign Up to save in your collection.
Scroll to Top