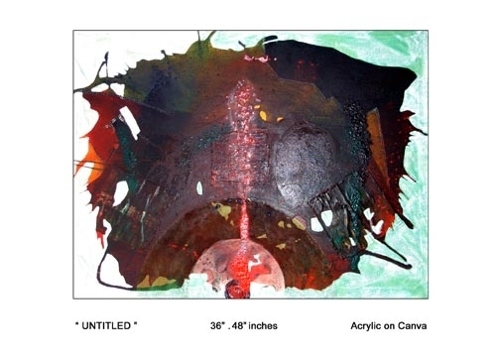 Meandering the internal-Diaspora Manjunath H.Lakshman paints as if the process is not painting but a sort of ‘construction’, on, forever. Strokes are rendered one above the other, to form a web, a net. The pun is intended. The web, the net and the pitfall of the infrastructure of ‘the’ city are interwoven into a labyrinth of no escape. Manjunath, a personality engrossed equally with the spell (maya-jaala) of words as well as imagery (he writes in poetry and other forms), is always conscious of ‘hailing’ from a rural surrounding to a city like Bangalore, which in turn is projected as a geography that has metaphorically ‘migrated’ from a farming/gardening city to the IT city. It is a city which is changing into something that in itself is unaware of. This is the similarity between the city and urban-migrants like the current artist*1*. This is also the point where the (a) artist (b) canvas and (c) the city meet: the construction happening in both of them seems to be an end in itself! Manjunath ‘moves’ the brush stroke for two purposes. They obviously, form a colour patch and also pave a path for the eye to move. Always you realize that the same route (and roots) is already trodden earlier by other brush strokes. Together, the actual web and metamorphosing net formed by the colour area and/or the brush stroke create two imageries: one within and the other without. A face-always-in-the-making emerge from each of his canvas. And it performs a subordinate job of reminding you of the folksy Indian visual revivalists of yesteryears in a tongue-in-cheek manner because all the rudiments of the act of portrayal are absent but the portrait is ‘felt’. The white geometric areas formed in between and betwixt the web-net nexus rather challenge a hard rendered perception of the eyes. They are there, formed without being touched, surrounded by contemplated strokes yet they draw one’s attention without being penciled (so to say). And the religiosity evoked by Manjunath’s rendering technique and effect, for it recalls an obvious tradition of stain-glass painting, is all in the ‘process’ of personifying the experience of a city. The portrayal of the city comes through its vacuous white spaces, what is rendered also turns out to be that which serves as a background to what is not, a constellation of (literal) relief textures treats the city as a constellation as pathless, map-less meandering, only to return back to where everything started in the beginning, through repeated layers. Many artists have expressed their awe of internal-Diaspora, from the rural to urban but Manjunath brings in a net, a web and a geography interwoven with each other. Everything, including the rural experience—is to be felt and lived only through the process of meandering ‘within’ the urban. NOTE: *1*. Amitava Ghosh points out that the Diaspora for an Indian is unique, for, it is in a verbal form unlike, say, a British Diaspora (see: his essay on Indian Diaspora in “Body.City”). The geographic Diaspora is the chief preoccupation of Manjunath in the current series of works./// -H.A. Anil Kumar

Sign Up to save in your collection.
Scroll to Top