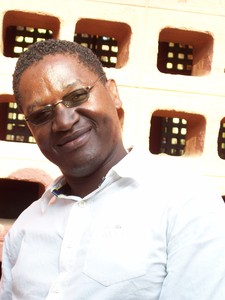 THE BIOGRAPHY OF ELLIS SINGANO

My full name is Ellis Tayamika singano born on 18 January 1980 ,I use Ellis   his artist name following his father ,himself a well known artist who passed away in 1998

I started art when I was about 13 years old ,my father used to chase me when he saw me doing ,although I did not want to become an artist I was just doing it for fun. I was dreaming of becoming a scientist.

When I was 18 my father passed away ,when my father was at the hospital I finished some of his painting that were unfinished ,soon after his death a lot of his customers asked me if any of his children knew art; I jumped into it and started delivering to them.

My dream of becoming a scientist was buried after the positive feedback  from customers who saw continuation of my father’s style in me,

Then I started reading more of the great artist such as Pablo Picasso, Henri matisse  ,Claude monet =they inspire me more with their great art.

In 2000 I started exibiting my works and developing my own styles ,and I have managed to do over 30 art exibitions across Malawi and outside.

Recently I have introduced a new art called “SOIL ART” after seeing that there are different soil from one place to another, I came up with an idea of  bringing these soils together to produce an artwork.

I put my first soil art called ‘the useless hole’ on exhibition in Lilongwe where I sold it straight away, and I managed to get a lot of customers for soil art. since then my art talent has grown and now I’ve started adding dried leaves to soil art to make it more beautifuL