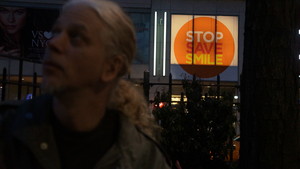 Born on April 6 in the town of Huntington, New York, Kevin Corcoran knew from the time he was given a book on Michelangelo during his junior year of high school that what he was meant to do in life was to create.

In a subway in Manhattan during the 80's while working for Broadcast Arts, Kevin was seen sketching by then, the dean of Parsons University, who was thrilled by the rawness of Kevin's ambidextrous skill in drawing. On the spot, Kevin was offered a 2 year scholarship to the school to foster his talents. Kevin accepted the invitation to Parsons, which further cultivated his ingenuity in art. He studied under the coaching of David Passalacqua.

On painting, Kevin's representational artworks are characterized by explosion of colors and movement. His vibrant artwork sparks critics of his strokes and adventurous color palette that trigger deeper thoughts between the viewer and the subject. However, the spontaneity of movement between contrasting colors, bold strokes against fine lines creates a unique and harmonious presentation that is abstract yet realistic, distorted yet beautiful, bold yet subtle, daring yet delicate, realistic yet imaginary.

Like any well-known impressionist, Kevin creates perceptions rather than exact representations. If photography produces lifelike images, his painting is the nonobjective alternative to a photograph. He paints a snapshot interpreted subjectively to his ethics of taste and conscience. To him, painting is transferring the artist's feelings into a medium and allowing that emotion to impart life into the creation guided along with technical understanding.

At present, Kevin continues to study the conceptual perspective of humanity in his subjective artistic expression. He is also pursuing his bold style in his colors and solid strokes that convey his feelings and his state of mind. He believes that the manner of his execution depicts his individuality. Kevin quotes, "Art has its own life and you will never know where it will take you but as long as you keep doing it and keep pushing forward, it will only take you to a better place.”

In the exploration of Kevin's artistry, some of his genius contribution to art can be seen at the Scultpure Restoration at Vanderbilt Museum, Suffolk county, NY; The creation of the entire interior of The Cee flat gallery (with co-owner/artist Peter Bragino) in Brooklyn, NY; The 240 ft. collaborative mural at West Gilgo Beach, NY among others...